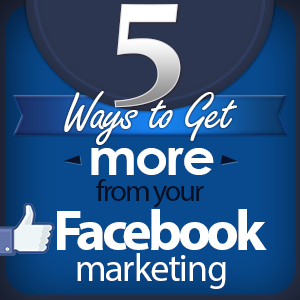 In some ways we’re living the Golden Age of Ambition. Everyone has an idea, and in the Internet Age we all have the basic tools to take that idea to the market with a minimum of investment in terms of either time or money. It’s easier to create an App, a web service, or a real-world business today than it ever was in the years past, and it’s easier to market and advertise that business, too.

But do you know what the single biggest misconception about business in the Internet Age is? It’s the belief that just because it’s all easy, it’s also effective. Easy doesn’t mean effective, and it never will. If you’ve ever tried to market or promote your business on the Big Kahuna of social media platforms, Facebook, then you know this from bitter experience: It’s the simplest thing in the world to promote yourself on Facebook. It’s just that all too often those easy campaigns don’t accomplish much. Here’s five easy things you can do with your next Facebook campaign that will make your promotion and marketing much more effective.

Your Facebook page has friends, and you’ve joined appropriate lists and communities. Did you do that just for fun? No, you did it for research – now go do some. Find out what your audience is already clicking on, and more importantly, what they’re sharing. That’s what you want. Get a clear idea on what people are reacting to, then swallow your pride and mimic it. Note, we didn’t say rip it off – just use it as a model.

Review what you’re putting out there on Facebook – it should be composed of no more than 10% links to other sites. While sending out interesting or amusing links to folks is a great way to build a community, original content that brings people to your site should always be your focus.

Don’t view Facebook promotion as a chore – view it as an opportunity. Write blog posts that really explore a concept. Create a video – it’s easier than you think. If you shoot for a Big Win and fail, you’ll still end up with more on your plate than if you simply regurgitated the same link everyone else is sharing.

Here’s a good rule of thumb: If someone else sent you a link, don’t count it as part of your own promotional work that day even if you pass it on. You don’t want to just be a way station for other people’s content. Becoming known as the place that shares content no one else is finding? That’s valuable.

It is social media, after all. Don’t pre-schedule a week’s worth of posts and then simply ‘like’ every comment. Respond! Respond thoughtfully, and conversationally. Offer your opinions and answer questions – and ask questions. Building that community will be worth more than any number of re-shares.

Facebook, like everything else, continues to be an evolving, moving target. You have to be prepared to move and evolve with it to get the most out of your Facebook campaigns.

Hope you have enjoyed this article, don’t forget to leave your comment!